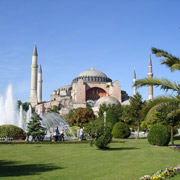 It is the most booked tour as a shore excursion or daily tour from Hotels and Airport for people who wants to see the highlights of Istanbul. 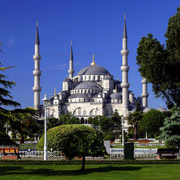 Halfday Istanbul tour is for people who has an additional day in their cruise vacation that is docked to Istanbul Port or has time till their late fight. 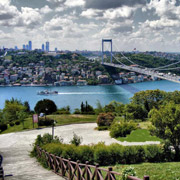 Istanbul Bosphorus is between Europe and Asia. Wouldn't be interesting a tour that you can touch to the both sides in the same time? 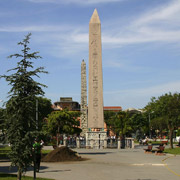 Istanbul Package tour is for 4 days-3 nights. It is perfect for visitors who has couple of days, has no plan and cursious about the history of Istanbul 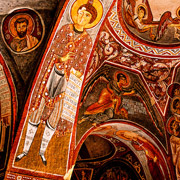 Istanbul&Cappadocia combination in one package with amazing sightseeings and unforgettable moments for visitor who wants to see both impressive places. 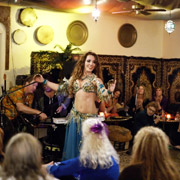 Turkish Night is full of Turkish Folk Dance shows, Belly Dancers with dinner(Turkish cuisine) and it takes about 2-2,5 hours every evening.

Imagine a city that most popular civilizations were jealous for hundreds of years.

First settlement clues dating back to the 7th BC and excavated by archaeologists at the 21st century AD, which is indicate Istanbul settled earlier than previously thought and before the Bosphorus was even formed. Due to legend, the colony of Byzantium was found in 660 B.C. by a Megarian named Byzas which was named after him. Byzas chose the spot after consulting an oracle of Delphi who told him to settle across from the "land of the blind ones".

Greeks, Athenians, Persians, and Spartans fought over the city early on. Even the Gauls attacked Byzantium in the third century B. C. In 202 B. C. Byzantium, besieged by Macedonians, asked Rome for protection. By 73 B. C. the city had become part of a Roman province. In A. D. 196, Byzantium found itself on the wrong side of an internal Roman power struggle and paid dearly. Roman emperor Septimus Severus (146–211; r. 193–211) massacred its residents and destroyed most of the city. He rebuilt Byzantium, which continued to prosper despite serious attacks, civil wars, and rebellions that broke out in the Roman Empire over many decades... more info

Last visited this part of the world over 24 years ago as part of a package holiday tour so decided this time to spend a little more time getting reacquainted with this beautiful city. As we wanted something a little more personalised we contacted Burak and his team at Shore Excursions...